The Golden Mile is an elegant palm-fringed avenue that parallels the shoreline between Marbella town and the marina of Puerto Banús. The most illustrious residential zone in all of Marbella, it builds on pedigree and the quality of its properties, amenities, location and refinement.

After the founding of the Marbella Club Hotel on the Golden Mile, villas appeared on the privileged beachside and inland areas on both sides of the avenue, later added to by luxurious apartment complexes, art galleries, designer boutiques, parks and extensive estates such as those surrounding the palace of the Saudi royal family.

The classic Golden Mile area bordering the avenue later expanded inland, following the gently sloping terrain up to the base of Marbella’s La Concha Mountain and producing suburbs such as Rocío de Nagüeles, Sierra Blanca and Cascáda de Camoján, with Casablanca as the final beachside extension before you reach Marbella town itself.

Together, they form the basis of an exclusive residential area at the heart of Marbella. For all that it is just minutes away from the shops, restaurants, yacht harbour, beach clubs, nightclubs and El Corte Ingles department store of Puerto Banús, the golf courses and international schools of Nueva Andalucía, and the charming ambience, beaches and amenities of downtown Marbella—the Golden Mile is a highly select and private zone.

DISTANCES (from the Marbella Club Hotel) 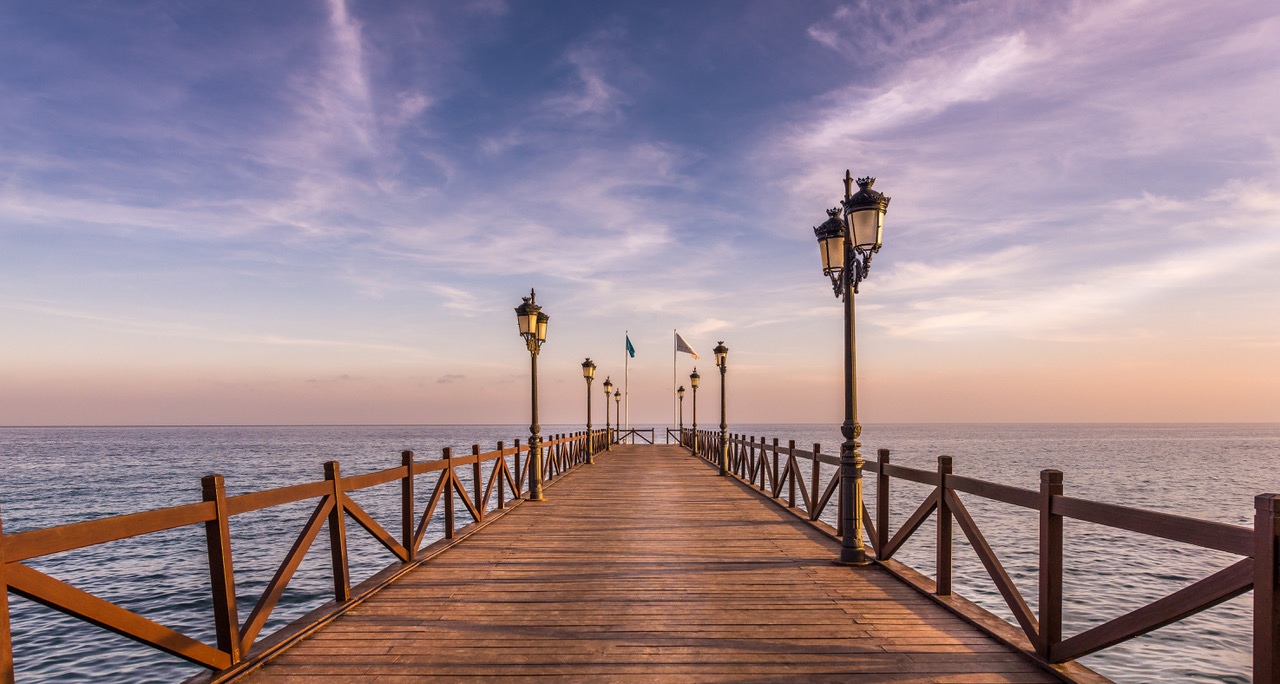 Now synonymous with luxury and glamour by the Mediterranean Sea, the Golden Mile is not only Marbella’s finest address – it is the very spot where its illustrious story began, with the opening of the now legendary Marbella Club Hotel on the 8th of April, 1954.

The spiritual father of this iconic hotel was Prince Alfonso von Hohenlohe, who is often cited as the person responsible for putting Marbella on the map, but to fair he solidified a process that had begun before, with the founding of Marbella’s first hotel, El Comercial, in the 1920s.

The seeds had also been sown by earlier pioneers, such as Ricardo Soriano, Marqués de Ivanrey, but by the time Prince Alfonso’s cousin, Count Rudi von Schönburg, came to manage the Marbella Club it had been well and truly ‘discovered’ by the international jet-set.

The early days saw celebrities such as Audrey Hepburn, Mel Ferrer, Bob Hope, Frank Sinatra, James Stewart and Deborah Kerr joined by aristocrats and the business tycoons of the day. Later generations included the likes of Liza Minnelli, Brigitte Bardot, James Hunt, Sean Connery and many, many more, including the Onassis and Roussel families, Saudi royalty and the extravagant Adnan Kashoggi.

The Marbella Club was the focal point, for people flocked to this newly explored paradise with its beaches, palm trees, green valleys and mountain ranges at the point where Europe’s climate meets that of Africa. It was added to by the Puente Romano Hotel in 1979, and ever since the two sister hotels have formed the very heart around which the Golden Mile evolved, now forming an elegant, palm-lined avenue of 6,5 kilometres that connects Marbella town and the nearby Puerto Banús marina.

The most prized part of the Golden Mile is its beachside zone, which offers uninterrupted open sea views, while from the slightly higher terrain on the inland side of the avenue, the 200-degree south-facing views also span east and west to follow the coastline from Río Real to Gibraltar and North Africa. 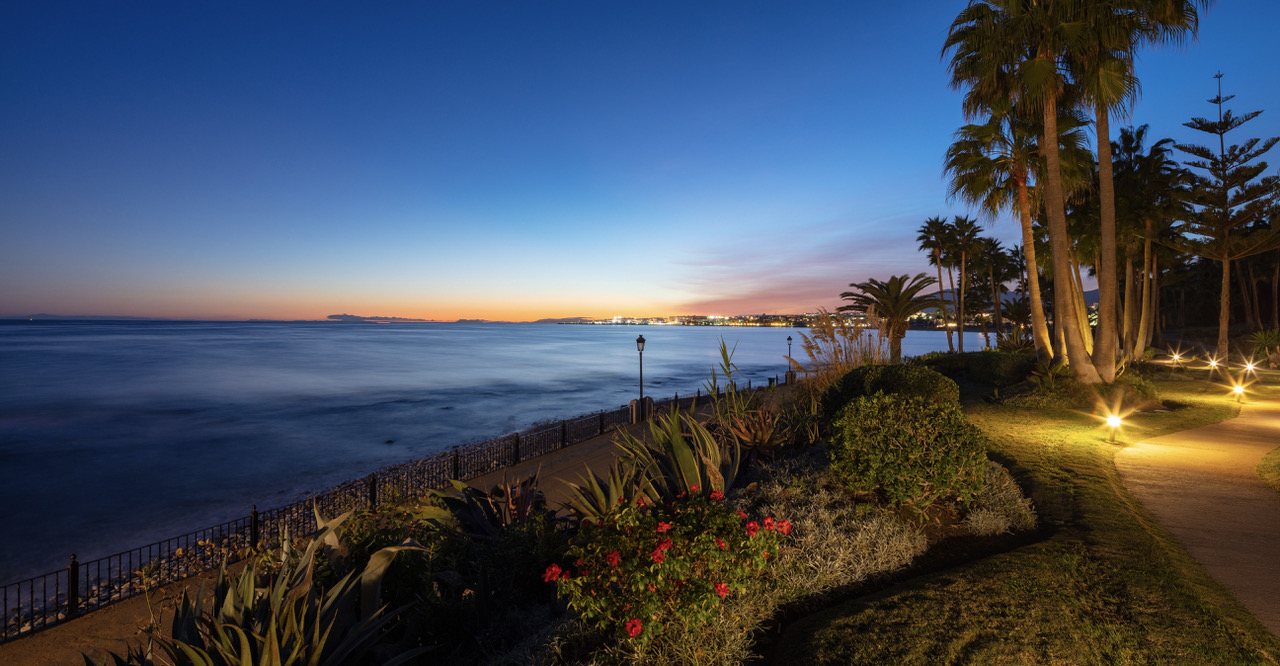 There is a clear price distinction between the beachside and inland parts of the Golden Mile. In the former, the only properties below €1 million are the townhouses of Marbellamar. For the rest, the apartments, penthouses, villas and estates of beachside Golden Mile range from €1 million up to €30 million or more, and there is more demand than supply.

The top urbanisations include Coral Beach, Oasis Club, Marina Puente Romano, Marbella Club and Casablanca, while on the inland side Las Lomas de Marbella Club, La Virginia, El Ancon Sierra, Coto Real and others rank among the most notable residential areas, typified by private villas in leafy surroundings, but also including luxury apartments and townhouses.

Within the Golden Mile, the finest properties are located in the area surrounding the Marbella Club and Puente Romano, where demand for luxurious, preferably modern villas and apartments/penthouses overshadows supply, and prices have risen to around €20,000/m2.

This beachside family townhouse is located in the heart of Marbella’s Golden Mile in a tranquil community called Marbella Mar. Situated within 50 meters from the beach, with easy access to all that ...

This luxurious duplex penthouse is located in Reserva de Sierra Blanca, an exclusive gated community in Marbella’s Golden Mile. Close to all amenities of the area, beaches, five-star hotels, and ...

This modern villa, under construction, is located in the discrete and tranquil area of La Carolina on the Golden Mile. One of the most exclusive areas of Marbella, known for its luxury properties, ...

Semidetached house in a new community of the Golden Mile

Outstanding, brand-new property in a gated community of 12 houses in the heart of the Golden Mile. Incredibly well located, a stroll from the beach and very close to the 5-star Puente Romano Resort. ...

This apartment is located in the desirable residential gated complex of Marina Puente Romano, in the heart of the Golden Mile. The luxury urbanization with 24-hour security boasts stunning manicured ...

A stylish apartment that is located in the sought-after resort of Puente Romano. In one of the most desirable settings on Marbella’s Golden Mile. The frontline beach complex with 24-hour security, ...