View all properties in Nueva Andalucia

What started as a farm is now Marbella’s largest suburbs, and one of its principal residential areas. Situated in a broad valley just inland from Puerto Banús and its beaches, Nueva Andalucía is a self-contained area that is also the epicentre of golf on the Costa del Sol.

Nueva Andalucía touches the glamorous beachside marina area of Puerto Banús on its southern flank, looks out over spectacular views of La Concha Mountain to its northeast, reaches the foothills of mighty sierras to its north and borders the country club environment of La Quinta on its northwest extreme. Occupying a broad, green valley ringed by hills and flanked by mountain ranges, this large residential area is also just a short distance from the town of San Pedro Alcántara and the centre of Marbella. In many ways it forms the heart of the greater Marbella area.

Though most properties here enjoy golf and mountain views, those on the gently sloping upper parts of Nueva Andalucía also feature broad coastal and sea views to offer the full set of panoramic vistas that Marbella is famous for: sea, golf and country views. Within an area roughly similar to that of Gibraltar (7,5km2), the landscape varies from a broad, level and gently undulating valley to hills, lakes and eventually the open countryside at the base of the Serranía de Ronda mountain range.

Residents of Nueva Andalucía enjoy an exclusive suburban and golf club ambience combined with close proximity to Marbella’s top amenities along with the ability to go hiking in the nearby hill country. This part is also home to the Lago de Tortugas (Turtle Lake), a pretty spot surrounded by picnic facilities.

It may seem strange to believe now, but Nueva Andalucía was once part of a large farming estate – in fact, at one point much of this coastal area was. Until 1830, when the French occupied Algeria, Tunisia and later also Morocco to put an end to centuries of piracy and slave raiding by Barbary Corsairs from North Africa, the coast suddenly became safe enough to live. Until then it had been largely desolate, with the population restricted to the mountain villages and fortified ports that offered protection from the raids that took almost a million people into captivity in North Africa.

Marbella expanded during this period, with the new agricultural settlement of San Pedro Alcántara adding to the fishing village that was to be discovered as a coastal jewel in the 1940s, setting the tone for the luxury international destination that it is today. Much of the area was made up of pastures, sugarcane fields and arable farmland right up to the 1960s, when the first houses appeared in Nueva Andalucía. They would have looked and felt like country properties, surrounded by open land, and it was only in the 1970s that this part of Marbella developed the critical mass to become a true suburb of the town.

From then on Nueva Andalucía evolved into the largely established residential area it is today, starting on the east side and expanding westwards to where the municipal boundaries of Marbella and Benahavis meet. Early development followed the flowing movement of golf courses in an area where distinct suburbs make up the greater one in what has become the largest of Marbella residential zones.

Within the valley itself, the main views are of the golf courses of Aloha, Las Brisas and Los Naranjos, framed as they are by rising hills, while the properties that stand upon the higher ground overlook a large part of Marbella’s coastal strip and the Mediterranean Sea from Marbella East all the way to Gibraltar and North Africa.

At its southern tip, Nueva Andalucía borders Puerto Banús close to the main coastal road. Here you will find the casino and H10 Andalucía Plaza Hotel, an excellent choice of restaurants and cafés, as well as a bullring now converted to a concert and music venue, and the popular Centro Plaza shopping mall. The latter features shops, eateries, hair and beauty salons, banks, offices, boutiques and a large gym, not to mention a weekly market on Saturdays.

A business centre, racquet club with gym and international college are located just east from here, where the Dama de Noche golf course was originally conceived to offer golf in the cooling temperatures of night-time play. The most residential complexes here are: 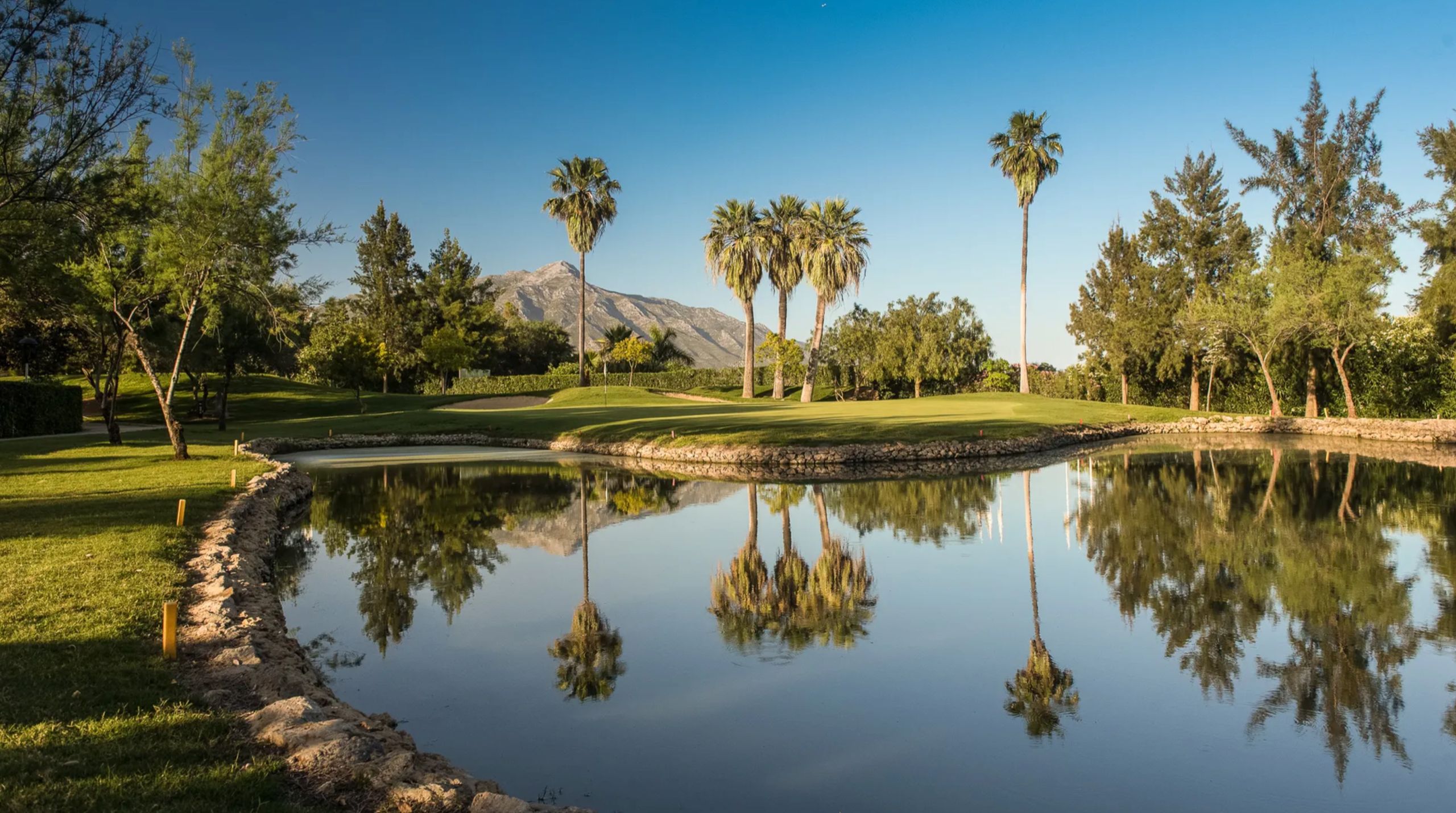 Originally developed around the lush greenery of the Aloha Golf Club, which was inaugurated in 1973, this area features private villas alongside an excellent collection of frontline golf townhouses and apartments within communities that offer space, Mediterranean architectural design and spectacular views. The main residential developments of Aloha are:

Though this is one of the oldest parts of Nueva Andalucía, the townhouses, apartments and villas in Aloha have a timeless appeal thanks to the scenic and convenient location, excellent upkeep, attractive design qualities and imposing views. Prices here range from €200,000 for smaller apartments to villas of over €2 million. They find themselves within a few short minutes of the Manolo Santana tennis and racquet club, and Aloha College, one of the finest international schools in Marbella, while Aloha Pueblo is a hub of restaurants, cafés, shops and nightlife venues.

One of the most exclusive of all golf courses in greater Marbella, the Real Club de Golf Las Brisas is one of few to carry the ‘royal’ epithet. Opened in 1968, it forms the heart of Nueva Andalucía’s Golf Valley, and is renowned for its verdant semi-tropical course and gardens. Designed in 1968 by none other than Robert Trent Jones Sr, Las Brisas Golf is a luxurious club at the heart of Marbella’s largest suburb. It has hosted top international tournaments as well as much-loved charity events such as the Jimmy Tarbuck Golf Classic, not to mention the greatest players that have graced the game.

What is now the stylish golf clubhouse was until the 1980s the Hotel del Golf, home of José Banús, creator of Puerto Banús. The leafy streets that surround it contain some of the finest apartments, townhouses and villas in Nueva Andalucía. Top urbanisations include:

Typically, properties in this area range from €300,000 for a rustic apartment or townhouse to beyond €10 million for the finest frontline golf villas in Las Brisas.

A relatively recent extension to Nueva Andalucía, Los Naranjos is a luxury villa suburb with a small collection of apartment complexes that offers a blend between suburban and country ambience. At its furthest extension, it touches La Quinta (Benahavis), and as elsewhere in Nueva Andalucía Golf Valley the focal point is the local golf club.

Robert Trent Jones returned to create this course in 1977, with the clubhouse designed by architect Marcos Saínz, who was also part of the team that designed Puerto Banús. The main residential developments include:

Property prices in Los Naranjos vary from €400,000 upwards for apartments to villas of over €7 million.

Among the urbanisations occupying higher terrain in Nueva Andalucía, such as Albatross Hills and Les Belvederes, La Cerquilla is undoubtedly the crème de la crème. Arguably the top suburb of Nueva Andalucía along with Las Brisas, La Cerquilla is a very private area dominated by Mediterranean, modern and also recent renovated villas that range from €1 million to €10 million or more.

With its shops, restaurants, schools, clinics, commercial areas, sports facilities, natural zones and especially its luxurious properties overlooking the manicured fairways of the Golf Valley, Nueva Andalucía is understandably one of the most popular residential options in the greater Marbella area.

This modern villa is located at the end of a private cul-de-sac in the sought-after residential area of Nueva Andalucia, frontline to the Royal Las Brisas Golf Club. Surrounded by several ...

This beautiful family villa is located on the heart of the Golf valley of Nueva Andalucia, surrounded by prestigious Championship Golf courses such as Aloha Golf, Los Naranjos Golf Club and Royal ...

This villa is a fusion of classical Andalusian style on the exterior, and contemporary design on the interior. Located within an elevated position in the heart of the Golf Valley of Nueva Andalucia. ...

This villa with a unique design allows a modern luxury lifestyle with a great entertaining area. Ideal for all-year living, or for a holiday home. Situated in a gated community with walking distance ...

This four-bedroom family villa is ideal for Golf lovers, as it is located in the heart of the Golf Valley of Nueva Andalucia. The villa is situated in Las Brisas and is surrounded by several ...

This modern renovated duplex-penthouse is located in Nueva Andalucia, in the established gated community of Los Belvederes with 24-hour security. Situated in the heart of the Golf Valley within a ...